The Promis device is a multi-frequency, multi-spacing 3 component slingram type EM System for sounding and profiling surveysl. This system features a transmitter loop to produce a primary magnetic field that will induce eddy current in conductive materials. These eddy currents will generate a secondary magnetic field that will be measured with the receiver loop. This system measures the in-phase and the out-of-phase components of the secondary magnetic field.
The length between receiver and transmitter loops range between 20 m and 400 m for standard applications. This system allows to work with 10 frequency ranging from 110 Hz to 56 kHz. The depth of penetration depends on the spacing and on the frequency. It is usually considered as of the order of half the spacing. Profiling can be performed by moving both the transmitter and the receiver to the next station.

Traditional HLEM slingram systems only measure the vertical component of the magnetic field (Hz). The Secondary/Primary magnetic field ratio, being linked to the soil conductivity, allows to locate conductive structures intersecting a profile. The 3 components measured by the PROMIS system permits to give an information on the direction (strike) of the structure (because the magnetic field remains perpendicular to the eddy current directions).
With the Promis system, the productivity is increased by an automatic processing (measurement automatically carried out for the set of frequencies, without required communication between the two operators). Two leds indicate when the transmitter has to move to the next station. Two inclinometers correct for deviations from horizontal position and a GPS unit can be connected. The selection of the frequencies and the stacking parameters is made at the beginning of the survey for optimizing the field work.

The data can be transferred, edited, filtered, plotted and exported with the EMSYS software provided with the instrument. 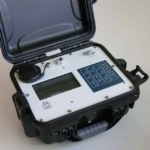 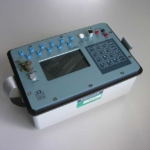